The Custom Interior Designers That Come To You

The interior decor that makes your home uniquely yours is more than just a series of random elements – interior living spaces tend to reflect the thinking and feelings of the people who live there. Jaime Perczek Design can help to discover your own unique vision and actively reach the higher creativity you desire.

The custom interiors created at Perczek Design are developed with over 36 years of custom furniture experience – we come to your home or yacht to capture and evaluate the essence of your vision and design objectives. It’s a holistic approach to interiors and furniture design that guides our process with intuition, spontaneity and freedom that will transform your home into a positive reflection of you and bring you closer to the living environment you love.

Jaime Perczek designs unique furniture that is aesthetically beautiful and correctly balanced to harmoniously compliment and enhance your living environment. From custom designed furniture and creative interior solutions - every project starts with conceptual and mechanical drawings. Our high tech drafting department easily receives and transmits pictures and drawings via e-mail using PDF or AutoCAD files. After the furniture is designed, the next step is the selection of the finishes. Perczek Design at DCOTA displays the largest collection of exotic finishes and semiprecious materials, sea shells and gem stones that can transform and beautify any home environment.

Our personal approach continues to elevate Jaime Perczek Design to the extraordinary – from personalized interiors and professional furniture design to expert manufacturing and installations. Visit www.perczek.com or call (954) 925-0701 for more information. 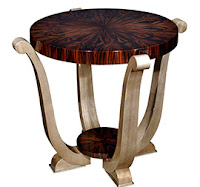