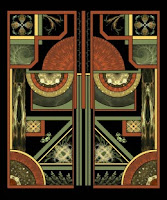 Posted by Unknown at 8:22 AM No comments:

Émile-Jacques Ruhlmann was born in Paris on August 28, 1879 to Alsatian parents. His family owned a painting and contracting firm, and Ruhlmann spent most of his youth learning his father’s trade. During this time he met several young architects and designers who would turn out to be Ruhlmann’s first exposure into the world of furniture design.

Ruhlmann took over the family business in 1907 after his father’s death. Around 1910, a newly married Ruhlmann had his first experience designing furniture for their new apartment. This was also the first year in which he exhibited his custom furniture to the public.

His early work reflected the Art Nouveau influence that was popular in France at the turn of the century. Ruhlmann’s influences can also be traced to architects and designers creating custom furniture in Vienna during World War I.

Contrary to popular belief, Ruhlmann had no formal training in cabinet or furniture design and did not construct the furniture himself. Other cabinet shops did all of his work until 1923 when he assembled his own cabinetmaking shop. By 1927, Ruhlmann’s shop had grown to two locations, employing master cabinetmakers, finishers, upholsterers, and draftsmen.

To understand the art of Ruhlmann’s furniture, one needs to take careful notice of his subtle use of grain. Ruhlmann was careful in not allowing the figure of the wood to vie for attention with the form of the furniture. His two favorite woods — Macassar Ebony and Amboyna Burl — both create soft but striking background patterns, without focusing attention on the wood itself. This allowed the veneers to support the design details instead of competing with them.

Ruhlmann’s talent for design and his mastery of material combinations produced unique furniture that is historically incomparable. His formal elegance made his contemporaries’ work appear lackluster in form, and garish with respect to materials and color. His impact on designer furniture will surely last forever.

Posted by Unknown at 8:03 AM No comments: